While the forecast in McCormick Place at RSNA 2010 might be described as “partly cloudy,” the exhibit hall at this past November’s annual meeting could be termed “cloud covered.” With image-sharing solutions, storage options, EHRs and other systems, everyone seemed to be touting something cloud based—even though Web-based platforms are nothing new to healthcare….

…. While Ed Heere, president and CEO of CoActiv Medical Systems, notes that the cloud in radiology is nothing new (CoActiv first offered its cloud-based archiving solution in 2003), he says radiology cloud solutions are “unquestionably gaining popularity and visibility today.”

Why such increasing interest now? Heere says the cloud offers hospital administrators real cost benefits, something that is welcome to those working in today’s healthcare arena of such uncertain economic realities. “The two major factors driving technologies are cost and image sharing, in part, relating to meaningful use,” he says. “Few would argue that ‘cloud’ has become a popular buzzword, but the technology has genuine cost-cutting benefits—for example, built-in hardware and software upgrades and IT maintenance provided by the vendor, shifting technology acquisition costs from a capital expense to an operational budget through the elimination of hardware purchase, to name a few. These are all important in today’s uncertain economic times.”

Just what’s out there in the way of real cloud options and who in radiology is implementing these solutions? Radiology Today spoke with a few facilities that have implemented cloud-based solutions to see what drove them to their respective choices and how they’ve fared thus far. 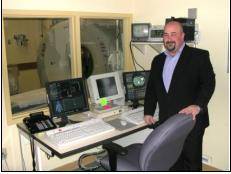 Northern Westchester Hospital, a 233-bed general medical and surgical hospital in Mount Kisco, New York, is one hospital that has been utilizing cloud storage services since it went digital about eight years ago, according to David Natoli, administrative director of imaging and cardiology services.  Natoli says the hospital implemented CoActiv’s EXAM-CLOUD QUAD-REDUNDANT ARCHIVING for primary storage, disaster recovery, and business continuity. “We also utilize EXAM-PACS running from the cloud to provide users outside the radiology department with fast, secure, and easy access to our images,” he says.

Natoli explains that CoActiv stores its images in four separate locations for better security while also providing image backup, archiving, and business continuity along with archiving. “This has given us significant cost savings when compared to in-house archiving by eliminating archive hardware, software, and maintenance costs,” he says.

Cost was a big part of Northern Westchester’s decision to try out the cloud, as was keeping its referring physicians happy. “With the CoActiv cloud-based archive service, we know exactly what our full archiving expenses will be year in and year out,” says Natoli. “By contrast, in-house archiving might require an unplanned capital equipment purchase of hardware if exam volumes exceed the predicted amount. Additionally, their cloud archiving eliminates the expenses of archiving maintenance and upgrades.

“Because images are stored in a vendor-neutral archive format, they can be easily communicated anywhere—for referrers, physician collaboration, second opinions, and even remote third-party post processing systems,” he adds.

Second, facilities considering cloud options might be concerned about the possibilities of downtime when dealing with Web-based solutions; that hasn’t been an issue for Northern Westchester. Natoli says there hasn’t been a single minute of downtime in eight years with CoActiv.

The hospital is happy with its cloud experience, and the imaging department is awaiting CoActiv’s newest cloud option, the EXAM-BROWSER zero-footprint universal DICOM viewer, which enables anywhere, anytime review of medical images via a Web browser.

“Shortly we hope to become one of the first sites to take advantage of CoActiv’s EXAM-BROWSER,” he says. “With this CoActiv EXAM-BROWSER, users can view and manipulate exams from any browser-enabled computer or mobile device, including the iPad, iPhone, Kindle Fire, Android, and other tablets and smartphones and actually be able to collaborate in real time and simultaneously view and manipulate studies in 2D, MPR [multiplanar reconstruction], and full 3D. This product will provide the service that I have been asked for most frequently by our doctors for the past several years … image access from their iPads.” ….